LOC team members were on-hand to witness the rollout of the first Boeing 787-10 aircraft ever built.  President Donald Trump attended the ceremony.

LOC provided design of utility modifications within the Final Assembly Building (FAB) 88-30 that supports the manufacturing of the new model.

Today’s rollout is a significant milestone for Boeing and LOC in many ways.  Boeing worked with LOC to develop the design for the latest addition to Boeing’s campus; the new Decorative Paint Facility (DPF).  The paint facility was opened December 15th and the first aircraft was painted soon thereafter.  The 787-10 is a Boeing-owned Experimental model that will be tested here in Charleston.  It is the first 787-10 aircraft painted in the DPF.

LOC Project Leader, Ken Barrett is proud of accomplishments achieved, challenges overcome, and resilience the project team demonstrated.  Barrett said, “The successful collaboration and teamwork between Boeing and LOC have made this day possible!”.  LOC recruited six design firms; each specialist in their own field to design the state-of-the-art facility.  Barrett continued, “We came together to create one of the most modern and unique paint facilities in Boeing inventory.”

For more articles on the Boeing 787-10 Dreamliner Rollout please see the following link:

We are always here and ready to assist you. Send us a message and we'll get back to you right away! 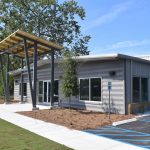