The first Honda dealership in the Charleston area will soon offer the first multilevel showroom in the region.

Stokes Honda North on Rivers Avenue in North Charleston will invest $15 million over the next 15 months to expand its offices, service department and car display areas in a nearly 200,000-square-foot facility.

The three-story addition will take 10 months to build while renovation of the existing 41,000-square-foot building will occur over the following five months, said Eddie Stokes, executive general manager.

When completed, the expanded dealership will nearly quadruple in size and include an additional 27 service bays. It now has 24.

“We have outgrown the current building, and we need to double our service department size and get our customers in and out of the store faster,” Stokes said. “We have more customers than we have space, and we want to give them a better sales and service experience.”

General manager Joe Dettrey noted the dealership has been struggling for the past four years to take care of the growing number of customers while realizing the current building layout needs to be changed on the nearly 5-acre parcel.

Funneling cars through the service bays now is like “putting 100 pounds of potatoes in a two-pound sack,” Dettrey said. “The expansion is going to improve the experience for everybody.”

The new drive-up and drop-off service area will include four bays that can hold four cars each end to end inside. Currently, the dealership offers two drive-up lanes with a capacity of two cars each under a canopy.

Of the multilevel space being built for new car inventory, Dettrey said, “It’s completely different for the Charleston market.”

The dealership, which has been at the corner of Rivers and Otranto Road since 1984 after moving from a site built in 1970 on Dorchester Road, looked at other properties to build a new facility but decided the current site works for visibility on a high-traffic highway as well as customer identity of the location.

“It didn’t make any sense for us to move from this corner, so we decided to build the multilevel garage,” Dettrey said.

Work has already begun on tearing up the parking lot where new cars were on display. About 450 new vehicles have been moved about a tenth of a mile north to a storage facility behind Piggly Wiggly supermarket off Otranto Road. The lot with 125 used cars is not affected by construction.

The dealership currently employs 114 people. When the expansion is completed, Stokes plans to add 30-35 employees, including 27 new technicians, one each for the new service bays, as well as new employees in the parts department.

Stokes operates 12 new-car franchises across South Carolina and in Augusta, including Mazda and Volkswagen dealerships in North Charleston and Kia in Goose Creek. Other dealerships for various car brands are in Beaufort, Bluffton, Newberry and the Aiken area.

We are always here and ready to assist you. Send us a message and we'll get back to you right away! 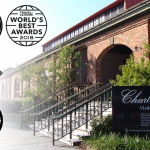